I was playing GTA today as usual. The bridge between San Fierro and Las Ventura just opened up. The last time I played GTA, I just followed the storyline, progressing the game. It was late into the game that I found out that there's a tank in Area 69.

So this time, as soon as the bridge is opened, I went directly to Area 69 to grab myself a tank. For some reason, the tank is not there. So how the hell am I gonna get off this desert with 5-stars worth of authority chasing over my ass? At first I thought I should grab a chopper but it'll probably just gunned down by the anti-air guns. So I grabbed a barrack truck, which is slow as an ass but tough enough to get me to San Fierro.

Then I thought I'd take a screenshot of the beatdown FBI car that I was driving. BIG MISTAKE. With my right hand holding the mouse, trying to get a good angle, and my left hand is getting ready to take a screenshot, a cop came from my blindspot and freaking arrested me. Right in front of my goddamn safehouse. And I didn't even save the game yet. At the moment as shown in the screenshot, I still haven't realised that the cop is right by the door. Damn.... There goes another 20k of cash, buying back all my weapons.

The moral of the story is: Save the game, dumbass. Then you don't have to go screaming, waking up the neighbourhood at 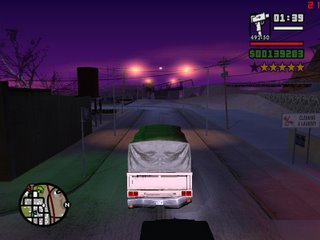 Looking for Batmobile, have to settle for KITT 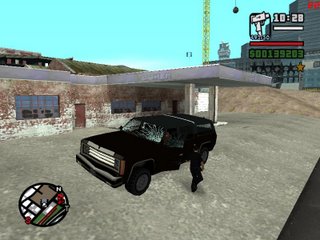 Posted by rexxdelarocha at 2:18 AM

Something to add here. I just finished the mandatory learn to fly an airplane mission. Under one hour.

Used to be evil. Now I pwned evil.

Oh, and I am exaggerated on my previous comment. It was just three hours instead of six.