This past Sunday, Comics Corner held a Type 2 tournament at the Subang Jaya Tournament Centre. Three of the Gamer Malaya guys (plus another guy who’s not part of GM but is in our playgroup) entered the tournament. Each of us piloted different decks. K’ piloted Scryb-Force, Azrulxp piloted Dragonstorm, while I myself piloted a rogue deck that revolved around Life from the Loam and Stormbind which are known as Land.dec. The other guy, Is, used a Boros deck.

What a day that was for me. I was fearing Dragonstorm but ended up facing 3 Trons. All of them the TriskeTron version.

In my first match, I lost 2-0 to TriskeTron. In the first game, he managed to recycle his Triskelavus with Academy Ruin every turn to the point that I will die to library death. In the second game, I lost because he drew a godhand.
0-1

2nd match. Another TriskeTron. I won the first game although it took me more than 30 minutes to beat the guy. On the 2nd game, he managed to remove 2 of my Life from the Loams, crippling my deck. Not to mention that he locked my Urza’s Factory with Faith Fetter’s AND Commandeered my Stormbind. Luckily I was saved by the time limit.
1-1

3rd match. Vs W/B Aggro. Finally, no counterspells to deny my deck. I won 2-0. On game 1, I Stormbind-Loam him to death. Second game, he mulliganed once and decided to keep his hand of 1 land. On 4th turn, he scooped up with only one land in play.
2-1

4th match. Against Solar Flare. To my surprise, the guy knew my deck. Every single part of it. He even knew different version of the deck. In the first game, his Angel of Despair and Akroma knocked my life below 10. Luckily I topdecked a Wrath of God to clear the table. Unluckily, he topdecked another Akroma which I cannot kill since I got only Stormbind in play and 2 Lightning Helix in hand which Akroma is protected against. Here’s how second game goes: His 3rd turn – Compulsive Research, ditching Akroma and Angel of Despair. 4th turn Dread Return, bringing Despair, killing my Stormbind. Next turn, he Return an Akroma and swing for 11. I topdecked a Wrath of God and Faith Fetter’s the following turns but in the end, I was raped by another Angel of Despair.
2-2

5th match. A Boros deck that was heavy on burn spells and filled his hand quickly with Howling Mine. I was quickly burned on game 1. On game 2, I got a COP:Red on my opening hand. With the help of his Howling Mine, I managed to Stormbind for 8 each turn. Game 3 was pretty much like game 2 but instead of COP:Red, I casted a Story Circle.
3-2

6th match. Another Tron. Lost game 1 to buybacked Spell Burst with more than enough mana to cast it three times a turn. On game 2, I managed to lock his mana with Loamed Ghost Quarters for 6-7 turns and burning him with Stormbind for 2-4 every turn but suddenly he Commandeered my LftL and completed his Tron. Next he drop a COP:Red which I managed to lock with Fetter’s but then he dropped another COP. He then accumulated his manabase that it is enough to stop an army of goblins. I then realised that the only way to kill him is with token creatures. He was at about 4 life and can recycled Triskelavus every turn. With the tokens that I generated, I can only score 1-2 damage every 3 turns. Then he hit a Jester’s Cap and started to kill my library. With Academy Ruin in play, I have no choice but to concede.
3-3 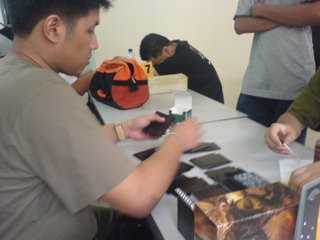 Is shuffling his deck 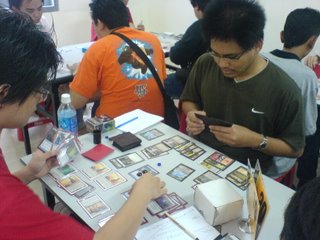 Rexxdelarocha. Game 2, Match 2. Right before we reached the time limit 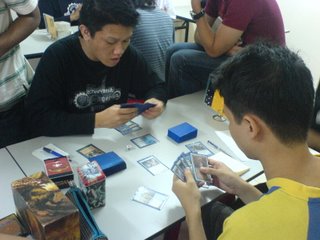 Coming Soon to a Server near you

Yup, I’m thinking the same thing too. Hurrah to no lag!! Hurrah to Bahasa in the General channel!! Hurrah to more and more toons with name like “KetuaKampung” and “SiJanggut”.

I’m thrilled, really. From the look of this thread, Warcraftsea (SEA stands for for those who are still blur) is going to be operated by Asiasoft. Asiasoft is best known as the company who brought Maple Story, RO, and the sudden craze Audition to . In fact, I didn’t know a 12 year old who doesn’t play Maple Story.

From the looks of it, is Warcraft going to be invaded by kids too?

Whatever it is, this marks the impact of Wow in the South East Asia Region. Sooner or later, the Warcraft will become an addiction you cannot resist.

(Magic-related article. Non-magic players scroll down for other articles)

Magic World Championship just over this past weekend. For the two consecutive years, a Japanese claimed the title of world champion. However, they were not able to retain the title for team competition as they lost to team Netherlands in the final.

Many things happened during Worlds including the return of Kai Budde, two players disqualified in a same match, and a 3-hours quarterfinal match between Gabriel Nassif and Tiago Chan.

Makihito Mihara claimed this year’s world champion title by piloting a Dragonstorm deck. We can now expect the price for the key-cards of this deck such as Dragonstorm and Borgadan Hellkite to skyrocket. Other cards that were included in the decks that reached top 8 (Urzalands, Proclamation of Rebirth, Teferi) can also be expected to increase in price. Better search for your copies while you still can. (Top 8 decklist can be found here.)

The Nassif-Chan match is interesting (or boring, depending on your view). The Martyr-Rebirth powered by Urzatrons netted Nassif shitloads of life. Chan can actually deals damage that would be enough to kill any other decks each turns. However, with Nassif’s life at hundreds (and gaining more each turn), 20 damage (or 25, or 30) per turn is nothing.

Worlds is over. The new season will start soon. The next biggest tournament in Malaysia will be on 17th December at Mid Valley. We can expect that there will be tons of Dragonstorms, Urzatrons, and Boros there. Either you play them, or meta against them.
Posted by rexxdelarocha at 10:54 PM 5 comments