Save the Internet, Save the World 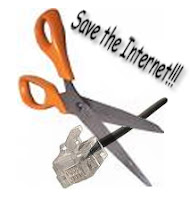 I’m talking about “Net Neutrality” not an episode from Heroes. Basically, it’s a principal of being equal. For example, a broadband network free of restrictions on the kinds of equipment attached and the modes of communication allowed would be considered neutral by most advocates, provided it met additional tests relating to the degradation of various communication streams by others.

However, this is not always being practiced. For instance, Streamyx limits the bandwidth use of BitTorrents. It is one way for TMNet to control the traffic in but often despise by its users. It’s even listed as one of the bad ISP by Azureus. “So why use Streamyx”, you say, let’s switch to Jaring. Unfortunately, TM owns the Malaysia Internet Backbone. Even if you switch, you’re still slow. The sad news is, you’re paying higher because Jaring is not a part of TM.

So you say, “What this have to do with me? I’m not downloading anything from the internet.” But if you’re an avid online gamer, you should know that you’re life is depending on your connection. Ladies and gentlemen, we’ve been a victim of capitalism. For example, we use PosLaju or Fedex to ensure our letters are delivered much faster than normal postal services. Some believed the Internet traffic should be subject to the same market forces, and want to be able to pay to ensure that their traffic get better handling.

What can we do? I can only hope we don’t rely on one company to manage the internet backbone of our beloved country.

I wonder, what's so bad about market forces? They create more value for consumers and producers than government mandates.

In full disclosure, I'm involved in the issue as a consultant. I work with Hands Off the Internet, and while the basic principles of net neutrality are more or less OK, it would be a terrible idea to pass laws that would restrict how companies would use the broadband they own.

And I do agree it would be bad if one company owned it all -- or if one government controlled it all. Competition works, and market forces are good.