For the countless hours I played Pirates!, I've never bother to do two things: Finding the Inca Empire and rescuing the whole family. Until today. This is me finding the lost city: 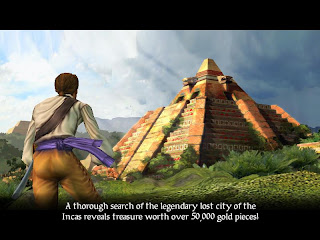 So there's only one thing left for me to do in this game then: Uniting the family.

For the record, the highest bounty I've got is 40,000 and got pirate hunters chasing after me whenever I passed by a Spanish colony. Up to this point (after two times dividing the plunders), I've turned almost half of the New World into French colonies.
Posted by rexxdelarocha at 10:04 PM

Ah, games! I'm somewhat of a gamer myself. Fast paced FPS is my choice.

Thanks for dropping by Delarocha (yeah, Rage rocks!-I have an entry that is devoted to RATM and their music).

Would you like to blog for Gamer Malaya? :P We pretty much don't have FPS player here.

Thanks for the invitation man! I appreciate it, but I think I have to turn down the offer. I'm somewhat preoccupied with what I'm doing right now :)