Ok, the reason I haven't posting for so long is that I've forgotten my username and also because I was busy playing with WoW and haven't had any idea to write about what (no doubt). Anyway, here's a brand new RPG; The Witcher.

This was taken from the Wikipedia (our salvation!) shamelessly :)

The game tells the story of Geralt the Witcher, who at the beginning of the game suffers from amnesia. He gradually learns that he's a very renowned witcher, and that he has had friends and enemies almost everywhere who remember him but whom he does not remember. Through the player's actions he will redefine those relationships and choose his path in the political intrigue that surrounds him.

Many parts of the plot actually depends on the choices of the player since non-linearity is one of the game mechanics which the developers tried to emphasize in The Witcher.

There are three camera styles available when playing The Witcher. The game can be played from one of two top-down perspectives, in which case the mouse is used to control everything, or it can be played from an over-the-shoulder view, which brings the player closer to the ingame combat, but limits visibility. In all the views the keyboard and mouse controls can be changed to be primarily mouse focused or a combined keyboard and mouse approach.

The combat system in The Witcher represents a departure from most RPGs. Players choose one of three fighting styles. The quick style allows for faster, less-damaging attacks with a greater chance of hitting faster enemies; the heavy style deals more damage in exchange for a slow attack speed, and a lower chance to hit faster enemies; and the group style, which features sweeping attacks best used if the player is surrounded. The player can switch between the styles at any point.

Each of these stances has its own unique combat style. Both of Gearalt's main swords - the steel and silver ones - have distinctively different combat styles from the rest of weaponry, and serve very distinct purposes: where the steel blade is used to fight humans and other flesh-and-blood beings, the silver one is more effective against supernatural monsters and beasts (against some of which steel may have no effect whatsoever).

Alchemy is a major part of gameplay. The player can create potions that increase health or endurance regeneration, allow Geralt to see in the dark, or provide other beneficial effects. The recipes for these potions can be learned through scrolls, or by experimentation. Once the player creates an unknown potion he can choose to drink it, but if the potion is a failure it will poison the character. Each time Geralt drinks potions they increase the toxicity level of his body. This can be reduced by drinking a special potion or by meditating at an inn or fireplace.

In addition to potions, the player can also create oils and bombs, respectively used to augment the damage done by weapons, or as weapons in combat. Neither can be created until talent points have been allocated into the corresponding skills.

A time delayed decision-consequence system means that the repercussions of players decisions will make themselves apparent up to 10 -15 hours later in the game. This prompts the players to put more critical thinking into making each decision, and circumvents a save-reload approach to decision making. It also allows the game to have a unique approach to replay value, as the consequences resulting from the player's decisions can lead to great difference in the events that take place later, and ultimately a very different gameplay experience than in the prior play-throughs.

The nature of the options faced when playing the game rarely falls into the typical black-and-white morality present in most regular computer RPGs, and the players often find themselves choosing from the lesser of two evils rather than making a clear choice between good and evil, a situation more reflective of real life morality.

If you're a true RPGist, you wouldn't mind about the game's visualization but gamers today are more attracted by candy-laced graphics (:P) so there's no worry there, the game look splendid. If you don't believe me, never fear, the screenshots are here (sounds cliche er?) 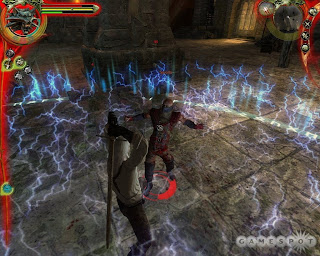 So, it's on par with all the RPGs they churn out these days. Thats all folks...
Posted by Doughlicious Cafe at 12:54 AM 0 comments

Greetings, mortals. Gamer Malaya is pretty dry nowadays, huh? If it's not about WoW, it's about Rock Band/ Guitar Hero. There's a lot more other games in the world, guys. Well, what do you expect? We're pretty much only play WoW nowadays.

I better stop talking about WoW now. Array is rolling his eyes already.

Disgaea 3 will be released later this year. I, however, still haven't finish the first one. I still have my 40-50 hours save game stored in the memory card. Finishing Disgaea is just an item in my "things to do before I die" list. Right after "constructing a death ray".

So what is Disgaea is all about?

Here is how the story began. You just woke up from two years of sleep only to find out that your father, the king of the Netherworld, has died. As the sole heir, you wanted to reclaim your rightful throne. But you are not the only one. Every single demon, including your vassals are aiming for the throne.

Being Satan is a lot of work. And the politics? The politics of the Netherworld is not much different from human politics. You have to get the senators' approvals for any proposals you make. you know, stuffs like cheaper or more expensive items at the very least. And how do you get the senators to vote for you? Well, bribing, of course. Get on the senators' good grace by bribing them. If they still reject your proposal, you can walk out, or persuade further. By persuade, I mean use force. Yes, draw your sword and fight the senators.

Now, let's talk about the battle. Well, if you're familiar with tactical RPG, learning curve for this game will not be that steep. Even if you're a tactical RPG virgin, it won't take more than an hour to learn the game.

Now, why is it that I still haven't finish this game after all this time? Let me give the big picture. A single battle can last about 10 minutes to as long as 40 minutes.

Now, let's talk about how to upgrade an item. You go inside the item, or the Item World. There, you must at least fight through 10 battles before you can leave. For each battle, the item will be upgraded by one level. Depending on the rarity of the items, an item can be upgraded until certain number of levels only.

Now, this might not look too bad if we're talking about only your weapons or armors. But, you can even upgrade consumables for God's sake. Level 10 candy bar anyone?

So, those are just the basics of the game. There's a lot more depth to it. And the dark humor is really funny.
Posted by rexxdelarocha at 12:54 AM 0 comments