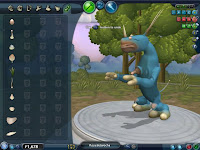 Meet Rexxie. Or better known as Rexxdelarocha. Sounds familiar? Yeah, it does sound familiar. Anyway, one hour into SPORE Creature Creator, it seems I can't stop creating creatures. Try browsing for more creatures in YouTube, there's so many it's like the SPORE Creatures are invading the internet.

This is however is not the real game because simply it will only allow us to create creatures and test drive them into life. The real SPORE will be release on 7th September according to EA Singapore. So in the mean time, let's just watch how cute Rexxie dances. Aww... here Rexxie.
Posted by Ed Numloque at 7:10 PM 3 comments

Many of us geeks take great pride in the ability to recite the history of role-playing games based on the 20-sided die, but what about the history of the die itself? Apparently it predates the original Dungeons and Dragons by almost two millenia.

Christie's, auctioneer to the rich and famous, sold a glass d20 from Roman times. It was included in a collection of other antiquities that sold in 2003. The markings on the die don't appear to be either Arabic or Roman numerals, but it's probably a safe bet that it was used in a game of chance. As the auction catalog notes that several polyhedral dice are known from the Roman era, but remarks, " Modern scholarship has not yet established the game for which these dice were used."

Next thing we know is that a long time ago, the Greeks have their own World of Olympus MMO and the pyramid is where the Pharaoh kept the server.
Posted by rexxdelarocha at 1:37 PM 0 comments

I started playing Guitar Hero sometime early this year ( or was it late last year?). And I started really playing on hard mode about a week ago. I'm telling you that the different between medium and hard is just fucking insane. It's like a totally new game. I five-starred Freebird on medium on regular basis but three-starred most of the songs in second tier of hard mode. Then I figured that it's gonna take me another lifetime to switch to expert mode.

Throug the Fire and Flames. When I first played this song, I thought some sort of sadistic bastard just put this in the game just to see how many chumps would fall victim to carpal tunnel. Immediately after the first try - which is during the end credit, so you can't "fail" this song - I decided that nobody - NOBODY - will 100% this song on expert.

It finally happened. And I still cannot believe it. I was this close of wagering that I will sell my kidney away if someone beat 100% Through the Fire and Flames on expert. Luckily I didn't make that wager as just about a week ago, a mortal finally did just that. And who else better to do it than the Guinness World Record holder? Chris Chike doesn't just pwned Guitar Hero. He IS Guitar Hero.

Posted by rexxdelarocha at 3:22 PM 0 comments