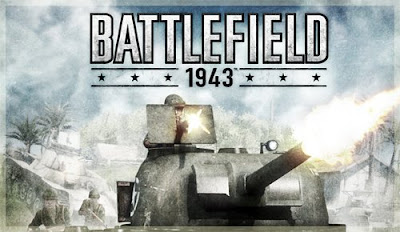 Well since our ace shooter is away for a few weeks (because of work) I’m here to take over the review of Battlefield 1943. Yerp, you read that right. EA is back again with their multiplayer only warfare since 1942 (the game, not the year of course).

The number of players have been downsize from 64 to 24. Why? I have no idea. It’s probably the upgrade of the in game physics such as blowing up the environment, or my personal favorite; blowing up walls to make a door. The game uses the Frostbite engine which we met before in Battlefield: Bad Company.

To be honest, I’m a noob in FPS games. However, I really like World War games (Medal of Honor Series, Battlefield 1942) and I look at this as a sign for me to make a return to FPS games. The problem is, this time, I’m equipped with DS3 (The PS3 Controller). In the 30 minutes, I couldn’t get a shot even though the enemy is right in front of me. The solution? Crouch. You’ll have better aiming and accuracy this way. (I know this is noob stuff. Damn you, recoil..)

There are 2 factions, the US Marine Corps and the Japanese Imperial Army and there are only 3 classes, just to simplify things. You’ve got the Scout (also count as the sniper), the Infantry (SMG and anti-tank) and the Rifleman (anti aircraft and infantry). There are also vehicles that you can use to take advantage on the battlefield such as Tank, Airplane, Boat and Jeep. Once you’re in control of the Airfield, you can call some Bombers to launch an air raid.

Overall, it’s a fun game to play with your friends and headshot them. Yeah, tough love. I just can’t wait for 4th map to unlock. Air Superiority podewin.
Battlefield 1943 is already available for 360 and PS3 for 1200 MS Points/US$14.99. Coming soon for PC in September.

Video Games | Brutal Legend | Tim Schafer Introductory Walkthrough HD
XBox 360 | Playstation 3 | Nintendo Wii
So it's ok to kill Nuns as long as they're demonic?
Whatever Tim.. I just can't wait for Rocktober.
Posted by Ed Numloque at 12:01 AM 0 comments

I promised you a review of Prototype vs. Infamous, but here’s the thing. I don’t like Prototype. So that would make my review of the game biased. But still, it’s definitely one hell of a game.

So instead, I’m bringing you Trine, a beautiful action/puzzle/platformer video game by Frozenbyte.

When I think of platformer, the first game I would think of is Prince of Persia (classic) and this is something like that. Hands on the demo, I was a bit skeptical at first. I mean, hey, this is 2009, platformers are dead. But surprise surprise, I get hooked up the moment I first play it.

There are three characters in Trine; the wizard, the thief and the knight. Seems basic right? But here’s the catch, you get to use all three at once. Well sort of, you switch characters with a press of a button. In order to solve puzzles or bypass an obstacle, you got use your characters wisely. The wizard has this power to create a box out of thin air and can levitate certain stuff. The thief is a fast and agile character using a whip (rope?) to climb and get to the unreachable places. While the knight is your basic tank and spank; slashing through an army of undead without fear – if you use blocking maneuver accurately.

Just like LittleBigPlanet, the physics of this game is something to be lookout for. For example, as a wizard, you can lift a box and drop it on a floor to open up an alternative route. Or.. pull a rock off the ledge to be drop upon an army of undead. Let just say, to complete puzzles, you really need to think outside the box.
The introduction to Trine is quite splendid. The narration fits perfectly with the story, and the voice casts for the characters are simply enjoyable.